Redevelopment achieved through a partnership involving the Open Market Traders, Hyde Housing Association, the Ethical Property Company and the council. 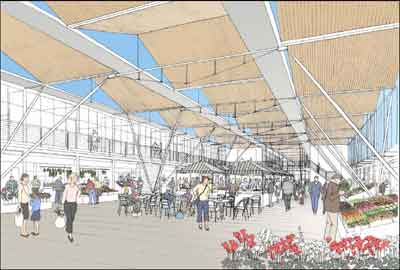 The Open Market is open for business

The Open Market re-opened for business on Saturday 19 July 2014.

45 new tenants moved into their spaces offering fresh, locally sourced food and goods, as well as a variety of arts, crafts, services and garden goods.

The new market is managed by the Brighton Open Market Community Interest Company (CIC), as a social enterprise for the benefit of the local community. The CIC board has representatives from the market traders, the council, The Ethical Property Company and the housing association, The Hyde Group who have developed the site. There are also independent directors.

History of the Open Market redevelopment

The redevelopment was achieved through a partnership approach involving the Open Market Traders, Hyde Housing Association, Ethical Property Company and the council

Even if the market is almost fully occupied, CIC are still accepting applications for permanent and temporary stalls in the new market. These can be downloaded from http://www.brightonopenmarket.co.uk

The Open Market is located in Central Brighton between London and Ditchling Roads and is owned by Brighton & Hove City Council.  Barrow traders first used the present site in 1926, with permanent stalls being built in 1938.  The Open Market has seen a slow decline in trade from the 1970s to the present day.

In April 2006, the council's Policy & Resources Committee agreed to support the Open Market Traders Association to produce a detailed feasibility design study with a business case for a proposed new market on the current site.

In December 2008, Cabinet agreed that the Open Market Traders Association and Hyde Housing should continue to work in partnership to advance the proposal to RIBA Stage D for final landowner consent, prior to submitting a planning application.

The redevelopment proposal was given landowner consent in February 2010.  Hyde Housing submitted a planning application in December 2010 and planning permission was granted on 9 March 2011.  This was followed by the signing of the Development Agreement in March 2011 between the City Council, Hyde Housing Association and the Brighton Open Market CIC.

Apply for a permanent or temporary market stall

The community interest company are still accepting applications for permanent and temporary stalls in the market. These can be downloaded from http://www.brightonopenmarket.co.uk

Send an email to the Major Projects & Regeneration Team at mpt@brighton-hove.gov.uk