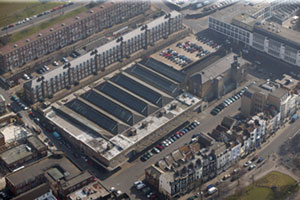 Land at Circus Street, (the former municipal fruit and vegetable market and university annex building), is being developed as a mixed-use scheme and ‘innovation quarter’. In 2021, developers U+I Plc estimated that they expected the project to create 400 jobs and inject £200 million into the city’s economy over 10 years.

The scheme is being delivered as a public-private partnership by U+I and Brighton & Hove City Council. Funders of the scheme include GCP Student Living plc, (the UK’s first Real Estate Investment Trust focussed on student residential accommodation), and Gravis Capital Management Ltd.

The scheme also benefits from an award of £2.7 million from the Coast to Capital Local Enterprise Partnership, via a Growth Deal.

The scheme was granted planning permission in 2014, and comprises of the following elements:

Under the development agreement completed between U+I and the council in August 2017, the developer will deliver all elements of the scheme except for the university building. The majority of buildings will be completed in 2019, with the University of Brighton bringing forward plans for their new building at a later date.

If you have any queries please contact City Development & Regeneration
by phone at 01273 293451, or send an e-mail to mpt@brighton-hove.gov.uk.