How we keep roads safe to use in bad weather.

We run a winter highways service from the beginning of November until the end of March, 24 hours a day, seven days a week. Keeping the city moving safely is our priority. The service includes salt gritting, snow ploughing, pavement clearing and filling grit bins for residents to use.

For the most important information check our winter weather page.

Who else looks after roads around the city?

What the council does 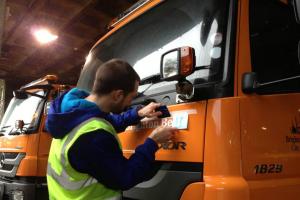 Our team of Winter Duty Managers use the latest technology in weather forecasting to decide what we need to do to protect road users during cold weather. These managers are on call at all times, including weekends and holiday periods. We look at the weather forecast for a 24-hour period and local road temperature data to decide what we need to do. We have six gritting vehicles, an all-terrain gritter and a pavement gritter.

Our aim is to keep major routes treated and clear. During severe weather we try to keep clear all A roads, most B roads and prioritise bus routes and access to local hospitals. We treat a total of 156 miles of main routes around the city when weather conditions require it - look at our gritting route map to see where we grit.

Salting and gritting won't guarantee that roads are free of ice and snow. We use weather forecasts to try and ensure that we spread salt and grit before severe cold weather strikes. This means that traffic will help to mix the salt into any surface water and help to prevent freezing. Unfortunately at very low temperatures salt will have no effect at all. Salt will not clear heavy snowfall. For this we must use a snow plough.

We will only grit pavements after main road routes have been cleared. During periods of prolonged heavy snowfall, we will clear pavements in priority order depending on which areas of the city are affected - starting with main shopping areas and pedestrian routes, then other pavements and local shopping areas. The pavement gritting list will tell you the areas that we will treat first.

No matter what we do, we cannot be sure treated roads will always be completely clear of ice or snow.

Treated roads can still have icy patches and drivers should be aware of the need to drive with due care at all times, especially when road frosts or freezing temperatures follow rain.

Although most of us call it gritting there is in fact no grit involved in the work done before snow. We spread rock salt on the roads. Our salt comes from an underground mine in Cleveland. It is largely the same as the rock salt you would grind into your food, but bigger and suitable for road use.

Grit is used after severe ice or snow on its own or in a mix with salt. The grit helps to breakdown the compacted ice and snow.

What does salting the roads do?

When we spread salt on the roads, we rely on the tyres of cars passing over the top of it to crush the salt onto the road to form this salt water.

Salt starts to become less effective at -5°C and stops working at very dry or lower temperatures. In extremely low temperatures, or heavy snowfall, a mix of salt and grit may be used to add grip and breakdown compacted layers of snow and ice. We also plough roads but this can't clear away all of the snow (for example around speed humps).

When and how do you salt the roads?

We salt the roads when we expect ice or frost to prevent icy conditions. We salt the roads before snowfall because this helps ploughing by acting as a de-bonding layer between the snow and road surface. We plan routes that can be completed within three and a half hours from leaving the depot so they can be finished before the ice forms. In snowfall, it takes longer to complete each run.

Which areas of the city are salted?

We will salt different areas depending on how severe the weather conditions are. We may only need to salt the coldest areas, or the main routes. In severe weather we focus on the main gritting routes. Decisions are based on these priorities:

We do not generally tend to close roads during winter weather. Not all roads are treated and in heavy snowfall even treated roads may still have ice and snow on them. We are not able to close all these roads. Motorists are advised to drive with caution on all city roads during cold winter weather.

Why don't you salt the pavements?

We only grit pavements after main road routes have been cleared. We will also only do it in particularly severe snow and ice.

We have over 1,000km of pavement in the city. Most pavements are too narrow to be salted by machine. We do place grit bins at locations across the city for anyone to make use of and we will clear snow away after prolonged heavy snowfall (in order of priority).

As with roads, salting pavements is only effective if there is heavy footfall to help with the treatment work, so we don't normally salt pavements before snow.

Clearing pavements by hand is a lengthy labour-intensive task and this work needs a lot of resources. The Duty Manager must decide where to use our resources and when the snow may be likely to clear naturally due to improved weather conditions. In heavy and continual snowfall, clearance may need to wait until the snow stops.

What are salt/grit bins for?

You can use the salt/grit mix on cleared pavements to stop more ice from forming, and provide extra grip while walking. We provide grit bins at over 400 locations in the city, often on steep road junctions or hills. Anyone can use them in icy weather.

How do I ask for a grit bin to be refilled?

Please complete our online grit bin form to ask for a bin to be refilled, moved or taken away. You can also e-mail gritbinrequest@brighton-hove.gov.uk.

During severe weather we collect all the requests for refills and then make a decision on when to refill depending on number of requests and forecasted weather conditions.

Can I have a salt/grit bin?

We have over 400 grit bins in the city and won't get any more. It already takes a long time and a lot of grit to fill them. More bins would make it take longer and use more salt/grit.

You can complete an online grit bin form to ask for a bin to be moved. We will balance any moves against the needs of the whole area.

We will place more grit/salt mix in strategic locations across Brighton & Hove in particularly extreme weather if resources allow. You can see a map of these additional grit drops.