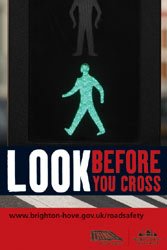 Sussex Police supplies personal injury collision information to Brighton & Hove City Council on a regular basis.  This data is checked and validated, and then used by the Transport Projects Team to investigate collisions and implement a road safety strategy. The data remains the property of the Police and does not include collisions where there is damage only (i.e. no reported casualties).

Brighton & Hove City Council is a member of the Sussex Safer Roads Partnership. The other partnership members are:

The casualties/injuries are categorised by severity:

Collisions are categorised by the most severe casualty category.  So if, for example, a collision results in 3 casualties – one fatal, one serious and one slight – the collision is categorised as a fatal collision.

Brighton & Hove City Council reconciles the current year’s data during the first quarter of the following year. However, the data is subject to change after this period should further information become available, which may mean data differs slightly from Sussex Police and as published by the Department for Transport.  The most up to date validated data that is publicly available is on the Sussex Safer Roads Data Portal. The data portal can be interrogated to localise data to Brighton and Hove and look at casualty priority group information and trends.  It also has basic mapping features.

It is important to target resources at those road users who are considered ‘most vulnerable’; that means people statistically most likely to be involved in a collision and/or most likely to sustain serious or fatal injuries.

Brighton & Hove City Council will continue to strive to reduce collisions and casualties through education, training, publicity and engineering measures.

Further and more detailed collision data will be added to the council’s web site as it becomes available.

Back to the top