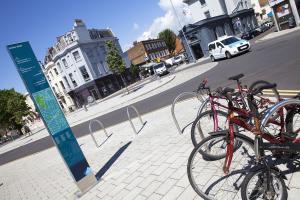 Seven Dials is a major road junction to the northwest of the city centre. It has seven roads that spread outwards from a roundabout, including the busy Dyke Road.

More than 26,000 vehicles travel through Seven Dials every day, with high numbers of vehicles and pedestrians competing for space during peak hours. Several bus routes run through the junction and four of the roads have retail frontages, resulting in a high number of pedestrians.

Improvement work were approved by the council’s Transport Committee in January 2013 following the positive outcome of the public consultation held in October 2012. Work on site began in March 2013 and was completed in December 2013. Get more information about the scheme.

The scheme aimed to address the very serious road safety issues that existed here - 41 collisions resulted in 44 people getting injured had been recorded over the last five years, with 18 of these involving cyclists.

The Seven Dials scheme created an oval-shaped central island with a wide, single circulatory lane designed to make priorities clear and space for shared movement through the junction. The movement of large vehicles has been accommodated, within an overrun area.

Three of the approach roads have also been reduced to a single lane entry/exit and pavements widened to reduce crossing distances. New street seating and cycle racks have also been installed.

New trees were planted in the immediate Seven Dials area. This was in response to the consultation exercises where local people said they would like to see more greenery and vegetation in the area.  The planting areas were constructed during the main construction works and the new trees were planted in the late summer / early autumn time. The new trees complement the newly improved area and provide significant benefit both in terms of visual appearance and additional habitat for wildlife.

The consultation was very well attended with over 1,400 people attending four public exhibitions, as well as an additional meeting with the Clifton Montpellier Powis Community Alliance.

Officers gave a presentation about the amended design at a public meeting on Monday 17 December at St Luke’s Church which was attended by over 150 members of the general public, Councillor Davey and Councillor Kitcat also presented at the meeting.

You can email Transport.Projects@brighton-hove.gov.uk for more information.