Website maintenance: You will not be able to view your Council Tax and Business Rates account information or bills online from 5pm Friday 23 September 2022 to 9am Monday 26 September 2022.

Electoral Services are sending emails about the annual canvass this weekend from brighton.hove.electoral.services@notifications.service.gov.uk. 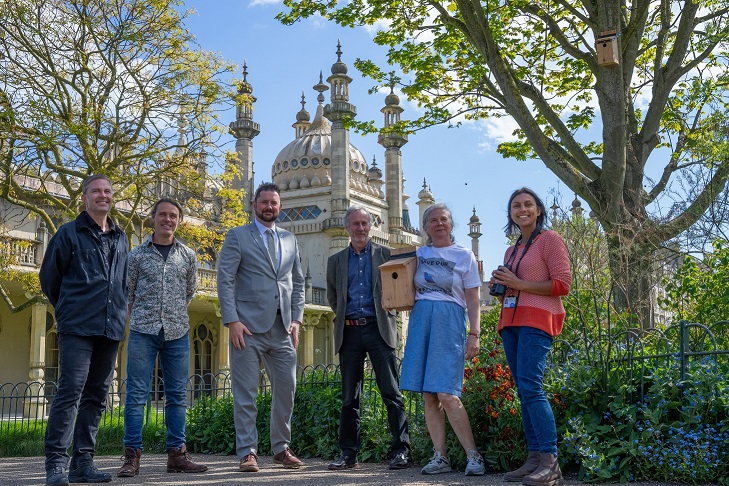 One hundred starling nesting boxes, generously gifted by artist Lou McCurdy, are being installed on council-owned buildings and open spaces across Brighton & Hove.

Five will take pride of place in the Royal Pavilion garden to invite starlings to nest in the heart of the city once again.

Starling populations used to thrive and sing out in the gardens, but over the last two decades, numbers have drastically plummeted, with local and national populations dropping by up to 90%.

Part of our cultural and natural heritage

The nesting boxes were crafted as part of the thought-provoking Undercurrents exhibition held at the Phoenix Art Space earlier in the year.

Lou McCurdy said: “I’m delighted that starlings are being recognised as part of Brighton’s cultural heritage at the Royal Pavilion Garden and that my nest boxes will bring further awareness of nature that inhabits our amazing city.”

The sight of starlings flocking together and swooping across the sky in different patterns – known as a murmuration – has become a familiar sight in Brighton & Hove.

Council leader Phélim Mac Cafferty, said: “These 100 nesting boxes are a labour of love. We’re so grateful for this gift and indeed the way people across the city have rallied together to talk about the city’s biodiversity as we find homes for starlings.

“Starling ‘murmurations’ around the piers and over the sea inspire so many of us in the winter months, capturing the wonder and vibrancy of nature in the city. But the dazzling sight of starlings in flight masks their plummeting numbers – they’re on what’s known as the ‘red list’ which means this is of international concern.

"So this familiar sight for our city is a stark reminder of our city’s precarious wildlife and why we must do everything we can to protect our city’s biodiversity.”

Protecting nature in the city

"We are proud to do everything we can to sustain the many birds, animals and insects in the garden which are maintained under organic guidelines, using natural planting techniques and organic compost, with the use of chemicals prohibited. “

Starlings are struggling mostly due to habitat loss including suitable nesting sites and because the insects that they depend on for most of their diet are also in decline.

The other nesting boxes are being put on school buildings and in open spaces run by communities such as the Benfield Valley Project.

Do your bit for nature

Create your own cosy starling home with this guide from the RSPB.

Help us to protect and celebrate our city’s wildlife by taking part in this year’s City Nature Challenge by spotting and sharing wildlife sightings from your doorsteps, windows, gardens, streets, or local parks.

You don’t have to be an expert or even know the name of the species you’ve seen. Just download the free iNaturalist app, take a picture of the nature you find, upload and share.

Your observations will support efforts to look after nature, parks, and green spaces where you live, and inform plans for tackling the biodiversity emergency in the UK.

City Nature Challenge is taking place from Friday 29 April to Monday 2 May.

Find out more and take part in the City Nature Challenge by visiting The Living Coast website.

Biodiversity is the planet’s life support system. Protecting and restoring nature underpins the health and wellbeing of people and wildlife in an era of climate change.

Do something for nature this Earth Day

Earth Day is an opportunity to think about what we can do to lessen the impact of climate change and protect nature. There are lots of ways to get involved and play your part.

Get your applications in for the Urban Tree Challenge Fund

The Urban Tree Challenge Fund (UTCF) is a government initiative to help towns and cities, such as Brighton & Hove, to level up access to nature across the country.

Continuing the climate and biodiversity journey

We are taking forward practical actions on climate and biodiversity and making our voice heard in the region, nationally and internationally.