History of women’s football celebrations planned for the city

Brighton & Hove as one of the nine UEFA Women’s EURO 2022 host cities is taking part in a National Lottery funded project to uncover the hidden history of women’s football in a summer of celebration of the game, its players and communities.

In partnership with the FA, the Royal Pavilion & Museums Trust joined a number of other organisations across England for the project which has been awarded £500,000 by The National Lottery Heritage Fund.

It’s an important year for women’s football, as England hosts the UEFA Women’s EURO and the Lionesses mark their 50th anniversary.

However, the history of the game goes back a lot further than many might think. This year also marks 141 years since women’s football was first played professionally. 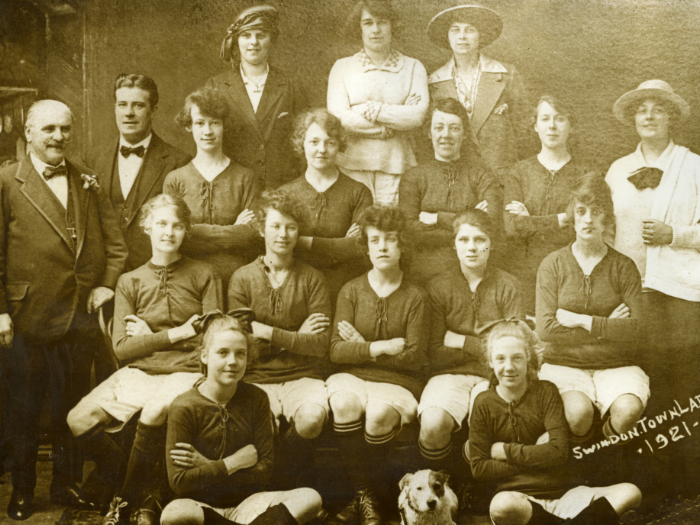 The National Lottery funded project aims to challenge the common perception of women’s football being ‘new’ and change the nation’s understanding of ‘the English game’. In addition to the National Lottery funding, The FA and host cities have contributed nearly £600,000 to the project, making a total of £1,060,580.

For the very first time, information about every England player, captain, goal scorer and match score since 1972 will be researched, recorded and shared alongside the information that already exists about men’s football.

Hosted on England Football’s website the record will continue to be updated, ensuring future female players are part of the nation’s footballing story. The project will particularly explore the role of the LGBTQ+ community.

Brighton & Hove is one of nine UEFA Women’s EURO 2022 host cities, taking part in a fantastic range of community events and celebrations this summer.

Staff at The Royal Pavilion & Museums Trust are excited to work with local footballers, past and present, to explore, record and share the heritage of women’s football in the city.

Teams such as Brighton GPO and Brighton Supporters Club were instrumental in the revival of women’s football in Sussex in the 1970s, changing attitudes towards women playing football, and paving the way for women and girls today to play football, both professionally and recreationally.

At the heart of the city’s offer is Brighton Museum’s major exhibition, Goal Power! Women’s Football 1895-2022, opening on 18 June. Plus, look out for costumed figures in the city’s Fan Zone during the tournament, sharing stories of women’s football from the past 130 years, and fun activities and thought-provoking events at Brighton Museum.

"There is a close and important link between the history of women’s football and women’s rights and empowerment and that will be a key part of our major exhibition ‘Goal Power! Women’s Football 1895-2022’.

"We are grateful to The National Lottery Heritage Fund for their support and look forward to working with Brighton & Hove City Council, Brighton & Hove Albion FC, Lewes FC and the FA to ensure anyone visiting our city in the summer of 2022 to enjoy the football has a brilliant time.”

Councillor Martin Osborne, co-chair of the council’s Tourism, Equalities, Communities & Culture Committee added: “We are looking forward to welcoming thousands of fans to the city this summer and are working hard to create an unforgettable experience for them, from a city centre Fanzone, to this fascinating women’s football exhibition at Brighton Museum & Art Gallery.

“We are delighted that The National Lottery Heritage Fund has recognised the significance of this tournament and the once in a lifetime opportunity it brings to unearth stories, and create a lasting legacy of the history of women’s football.”

CEO of The National Lottery Heritage Fund, Eilish McGuinness, said: “Thanks to money raised by National Lottery players, the hidden history and unheard voices of women’s football will be shared for the first time, capturing the full story of the beloved sport.

"We’re delighted to support this project which will give fans and players the chance to celebrate the history of women’s football and communities to discover their connections to the game.”

The UEFA Women's EURO 2022 tournament, coming to Brighton & Hove next year, will create opportunities for thousands of women and girls to get involved with the game as fans, players, referees and coaches as legacy programme is launched.

Regeneration of the Royal Pavilion Estate Project has received £1 million from the National Lottery Heritage Fund. It will be used for Brighton Dome’s Corn Exchange and Studio Theatre.

Football players from across the city are enjoying the newly renovated 3G pitch at Stanley Deason Lesiure Centre.