There’s just 500 days to go before the UEFA Women’s EURO tournament kicks off in Manchester on July 6.

Excitement is already building for the tournament which will see England's Lionesses joining 15 other nations, playing 31 matches at venues across the country including three at the Brighton & Hove Community Stadium.

Today, to mark the 500 days to go milestone, UEFA has unveiled a brand-new identity for UEFA Women's EURO 2022, which promises to be the biggest women's football event in UEFA history, deserving of the fresh, open and contemporary look that reflects the strength, diversity and ever-growing popularity of the game. 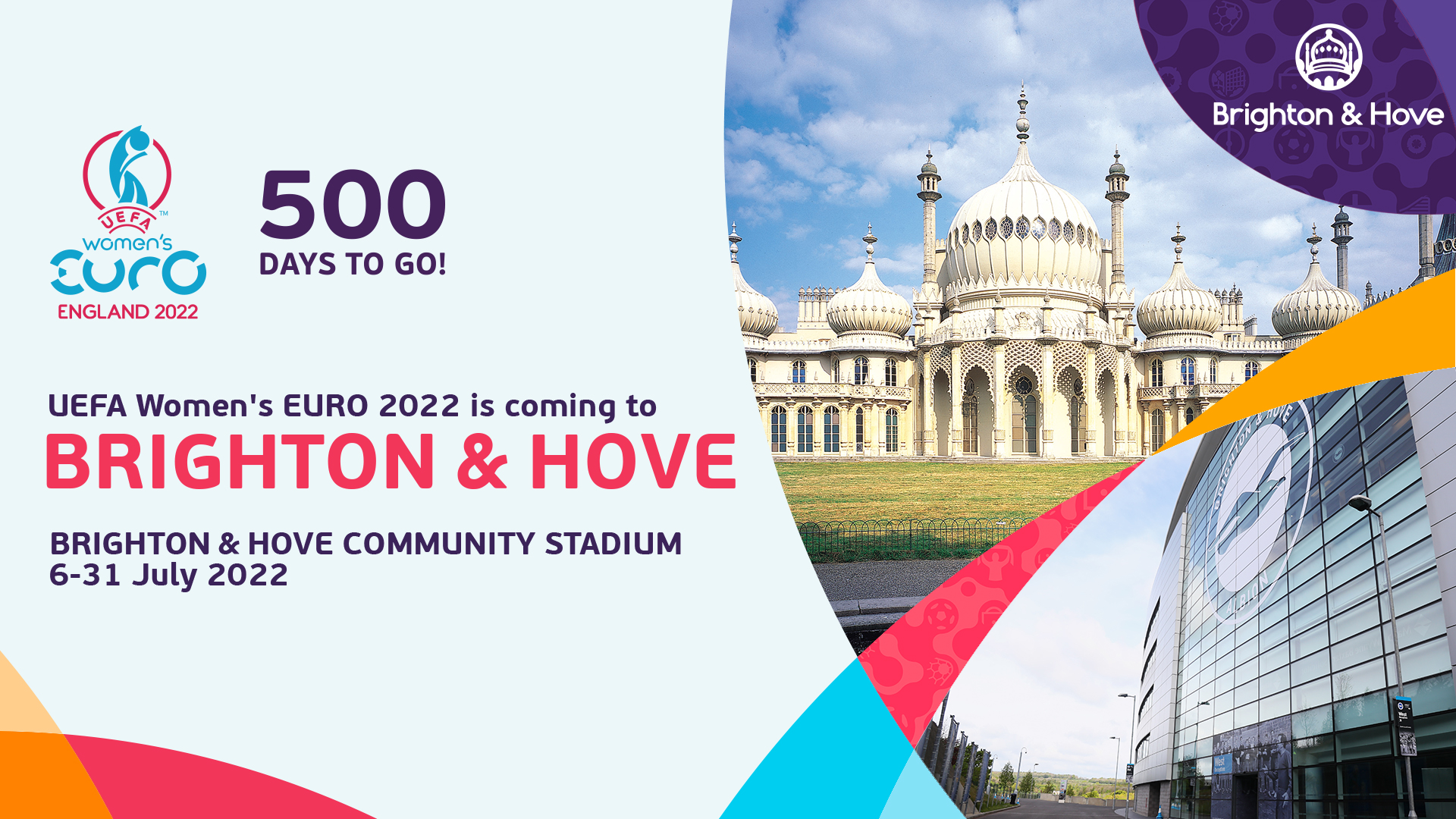 "We’re thrilled to share this new identity for the UEFA Women's EURO 2022," said UEFA chief of women's football, Nadine Kessler. "This new branding brings a fresh look and eye-catching feel for the tournament as we begin the countdown to next summer. We can't wait to see this emblem across host cities, stadiums and television when the action begins in 500 days' time."

Hundreds of thousands of fans are expected to attend the tournament and millions more will watch the globally televised event.

Originally scheduled for 2021, the tournament was, like UEFA EURO 2020, postponed by a year. This guarantees increased exposure for women's football in a summer without other major football events.

As one of the nine host cities, Brighton & Hove is planning a programme of fan events in the lead-up to and during the tournament, as well as a legacy programme to improve access to and participation in girls’ and women’s football.

There will also be a range of volunteering opportunities.

Three games will be played at Brighton & Hove Community Stadium giving fans an opportunity to see some of the world’s best players in action.

The final will be staged at Wembley Stadium on July 31. England previously staged the finals in 2005

Albion chief executive Paul Barber said: “Everyone at the football club has been eagerly anticipating and hugely excited to be hosting the UEFA Women’s EURO 2022.

“Initially these were planned for this summer, but due to Covid the tournament was delayed by 12 months; by the time it arrives I’m sure the extra wait will be worth it, as we are confident we will be able to welcome back crowds.

“We are looking forward to receiving more of the finer details around the matches we will be hosting, and with our commitment to women’s and girls’ football is increasing all the time, and we are very much looking forward to welcoming some of the Europe’s finest teams to our stadium.”

Support and interest in the sport is growing – currently around 1.7 million women and girls play football every year and it is now the top participation sport for women and girls in England. 900,000 girls between five and 15 play the sport which also has 150 affiliated disability teams.

Sussex County FA chief executive Ken Benham added: “With the countdown underway and excitement building we’re just as excited at the Sussex County FA; this a brilliant opportunity for us to showcase what passionate football people we have in this county and we hope everyone will be out in force to welcome the competition and enjoy having the world’s best players playing right here on our doorstep!”

Once in a lifetime

Councillor Martin Osborne, joint chair of Brighton & Hove City Council’s tourism, equalities, communities and culture committee, said: “The events of the past year have strengthened people’s desire to enjoy live sport in the city once again, so we are delighted to have begun the countdown to what will undoubtedly be one of the city’s greatest ever sporting events.

“We are proud to be hosting this prestigious tournament and look forward to the ‘once in a lifetime’ opportunities it will bring for our residents and visitors.”

He added that Brighton & Hove has a successful track record in hosting major sporting events, including the Rugby World Cup in 2015. In 2014 the city welcomed Stage 7 of the Tour of Britain bike race and the annual Brighton Marathon is the UK’s second largest.

As well as the new logo, extensive coverage of all 31 matches at UEFA Women's EURO 2022 will feature on free-to-air television, radio and online as 16 nations compete to be crowned European champions. This will ensure anyone, from committed or curious fans to the next generation of stars, can tune into the tournament and be part of the excitement.

"By moving the competition to 2022, we guaranteed that the biggest women's sports event in Europe receives the exclusive platform it deserves," Kessler said. "Alongside the English FA, we are confident of delivering a first-class tournament that will attract global attention and media coverage, leaving a legacy to inspire many more girls, and boys, to take up the game."

In another sign of the growing status of women’s competitions, the Video Assistant Referee (VAR) programme will be used throughout the finals for the first time.

UEFA's new ticketing portal is now open for fans to register for early access to tickets and stay up to date on all the latest information ahead of next year's finals.

Sign up for information on tickets for UEFA Women's EURO 2022 here.

If you have already registered for the postponed 2021 tournament, you don’t need to re-register.

For more information regarding the current standings and already qualified teams click here.

A special 500 Days to Go edition of the ‘The Football Podcast’ from UEFA Together #WePlayStrong is available now on on Spotify, Apple Music, YouTube and IGTV, featuring UEFA Chief of Women’s Football, Nadine Kessler.

Brighton & Hove Albion Women’s team manager and former England manager Hope Powell explains how women’s football is developing both nationally and locally, how the Albion is investing in the women’s game and why the stadium and wider city is the perfect location for the UEFA European Women's Championship.