We’ve unveiled and launched our brand new all-electric refuse lorry – the first ever to be owned by a local authority in the South East.

The lorry is the first of four electric lorries that will be launched this financial year to replace the old diesel ones being used at present.

This will bring the number of electric vehicles (EVs) owned by the council to 25, including an e-cargo bike, electric cars and vans, and a caged truck used for removing fly-tipping. 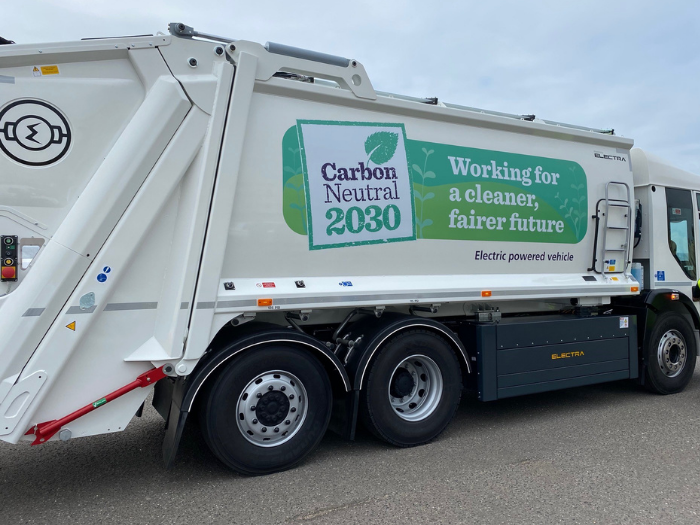 The council has pledged to become a carbon neutral city by 2030 and these vehicles are part of that drive.

By that date, and by using a fleet of EVs, the council will reduce its carbon footprint by a massive 7.5 tonnes co2 (7,500kg co2).

That’s roughly equivalent to saving the fuel emissions used in 11 Boeing 777 or Airbus A330-300 return jet airline flights from London to New York, which is around 77,000 air miles.

We’ll also save a whopping £400,000 on fuel costs by moving from diesel to electric.

Councillor Amy Heley, chair of the council’s environment, transport and sustainability committee, said: “We’re extremely excited about the introduction of our ever-growing fleet of all-electric vehicles.

“We’re also very proud to be the first local authority in the South East to have an all-electric refuse lorry.

“The carbon savings we will make is a hugely positive step towards becoming a carbon neutral city by 2030 and adds to the work we’re already carrying out like building sustainable homes, improving air quality and installing hundreds of on-street electric charging points.

“The £400,000 we will save on fuel costs means we can spend this money in other ways for the benefit of our residents.”

A bright future for electric vehicle charging in Brighton & Hove

Councillors will be given an update on the future of Electric Vehicle (EV) charging in Brighton & Hove next week, including some exciting new developments.