We’ve just launched a new clampdown on fly-tippers by installing CCTV and number plate recognition cameras at some of the city’s worst dumping grounds.

And within 24-hours of the new cameras being erected, six fly-tippers have already been caught unloading their unwanted rubbish, with fines totalling more than £2000.

Fly-tipping costs the council, and therefore residents, more than £100,000 a year, so it’s something we’re determined to stop or at least limit as much as possible.

The cameras are mobile so can and will be moved around the city as a deterrent to people who wilfully break the law by dumping their unwanted items on the street, at recycling points or on public and private land.

Fly-tipping is a criminal offence

Anyone caught fly-tipping can receive a minimum fine of £400. However, as it’s a criminal offence, fly-tippers can receive an unlimited fine or face court action.

The CCTV system also features Automatic Number Plate Recognition (ANPR), so when footage of a vehicle is captured, the number plate will be matched with data sources from Sussex Police to identify the vehicle keeper and help with prosecution.

Since lockdown, our enforcement officers have now issued 122 fines for fly-tipping, totalling almost £49,000. Each fine is £400.

Common examples of fly-tipping are:

• Dumping any household items like mattresses, fridges and sofas beside communal bins or recycling points

• Tipping rubbish or building materials in the countryside or green spaces such as parks. 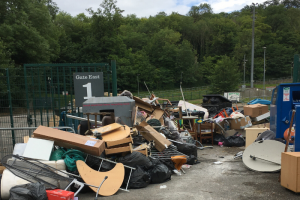 Councillor Amy Heley, chair of the council’s environment, transport and sustainability committee, said: “Fly-tipping affects everyone in the city. It costs the council taxpayers money, it damages the look of the city and harms the environment.

“We hope these cameras act as a deterrent, but if fly-tippers are caught, the cameras will enable the council to prosecute the offenders, which will help us tackle this ongoing problem.”

Use social media for unwanted items

Cllr Heley added: “There are many lawful ways to dispose of unwanted items including taking them to one of the city’s two household waste recycling sites or giving them away free on social media platforms like Gumtree, Freegle or Facebook Marketplace.”

Although our recycling sites don’t take builders waste from work done by a trader or commercial building company, even if it's from a residential home, they must dispose of waste themselves legally or use a registered waste company.

If someone or a company disposes of rubbish for you, please ensure they are registered to do so. If you don't, you could get a fine or have a court action against you.

Use our new fly-tipping hotline

The new cameras follow on from the council setting up a fly-tipping hotline - 01273 295063 – where people can report a fly-tip crime, allowing our staff to respond immediately.

Previously, people wanting to report fly-tippers had to fill in an online form.

But now you can also use the new phone line, which will be staffed from 8am to 5pm Monday to Friday, allowing enforcement officers to take swifter action, and possibly even catch the perpetrators in the act.

Callers outside these hours will be able to leave a message with details of where and when the fly-tip took place.

The new number is for reporting fly-tipping issues only, with the phone line operator not being able to discuss any other council issues.