Tackling exploitation in the city

The signs of criminal and sexual exploitation are being highlighted to help people know what to look for and how to help.

Children, young people and vulnerable adults are at risk of exploitation from criminal groups and drug dealers. Incidents of exploitation are on the rise across the country.

Action is being taken in Brighton & Hove by the council, Sussex Police and other partners to keep people safe.

The city’s community safety partnership is working together to raise awareness of the signs of exploitation, so it can be spotted and prevented at an early stage.

This June, a ‘Spot the Signs’ campaign launched in the city. Sussex Police, East Sussex Fire & Rescue Service, the council and community organisations and voluntary organisations took part in a week of activities including:

Chief Superintendent of Brighton & Hove Police, Nick May, said: “This joint week of action with Brighton & Hove City Council and other partners has proved an effective way to raise awareness of exploitation and how the public can to help prevent it.

“By combining our powers, we were able to reach more deeply into the community to help disrupt county lines activity, creating a hostile environment for gangs from bigger cities who exploit vulnerable people to carry out drug dealing, violent crime and criminal & sexual exploitation.

“As well as visiting 16 addresses where vulnerable people are known to be targeted by criminal ‘cuckoos’, we also made awareness-raising visits to 134 neighbouring addresses, gathering vital intelligence.

“We also visited more than 40 hotels, with licensing and Fire & Rescue officers in some cases, to brief management on how to detect and prevent criminal and sexual exploitation.

“During a visit to a budget hotel, a knife and taser were recovered and an arrest for serious sexual assault was also made during patrol between cuckooing addresses.

“We look forward to continuing to work closely with the community safety partnership to reinforce this preventative approach.”

“Children and vulnerable people who get drawn into this are the victims of crime. If you have any concerns about a young or vulnerable person in your neighbourhood, please do report them to make sure they can get the help they need.” 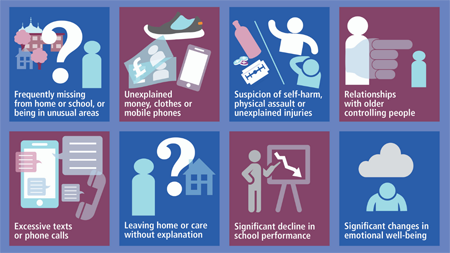 Recognising the signs of exploitation at an early stage is key to stopping it happening, especially when those involved are not always aware they are being badly used.

Some of the signs of exploitation include:

If you suspect that someone you know is at risk of exploitation, report your concerns to Front Door for Families (for children and young people) or Sussex Police (for adults).

The city’s community safety partnership links a range of local organisations working together on tackling all forms of violence and exploitation of vulnerable people in Brighton & Hove.

In emergency situations, the advice is to always call 999.

Action to tackle ‘county lines’ drug-dealing in the city