Glamorous hats from one of the world’s top designers go on show at the Royal Pavilion from February 7. 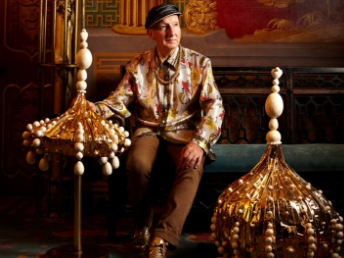 During his 40 year career, Jones has dressed the finest heads from across the globe – most recently the Duchess of Sussex, as well as Lady Gaga, Kate Moss and Mick Jagger.

This new, site-specific exhibition will show hats worn by these celebrities, and others along with those made in collaboration with top fashion designers, including Dior, Thom Browne, Giles Deacon, Comme des Garçons, Marc Jacobs and Matty Bovan.

“I grew up in a seaside town, but Brighton to me seemed exciting, exotic, and it symbolised art and freedom,” said Stephen. “In 2012, I designed a collection called ‘Chinoiserie-on-Sea’ for which I researched Brighton, and in particular the Pavilion, extensively; and it feels like showing my hats there is almost like a homecoming. I have never had the opportunity to display hats in the environment which inspired them.”

•    The opulent Banqueting Room hosts a ‘dinner’ for the hats of the most famous wearers including the Duchess of Sussex, Kylie Minogue and Missy Elliott

•    Royal and regal hats are on display including a series of crowns and a new felt hat for King George IV, a recreation of a hat worn by the monarch which appears in a portrait from 1783

•    Food and feasting inspired hats are placed among the copper pots in the Great Kitchen, from a giant swan headdress to a knitted ‘English breakfast’ hat

•    Hats inspired by the interiors of the Royal Pavilion made for the China: Through the Looking Glass exhibition at The Metropolitan Museum of Art will be on show in the Music Room along with gowns by the House of Dior

•    Hats exploring the theme of Pride, and those inspired by music and musicians including Aretha Franklin and Whitney Houston

•    There are gowns by Dior in the Music and Egyptian Rooms, mannequins dressed by Giles Deacon will ascend the staircase wearing oversized headdresses, and a mannequin wearing a Thom Browne ensemble is on display in the King’s bedroom

The exhibition, which has been co-curated by Stephen Jones OBE and Martin Pel, Curator of Costume and Textiles at the Royal Pavilion and Museums runs until June 9. The exhibition is presented in partnership with Harvey Nichols.