Pick up your badge celebrating the images of a number of significant people now to mark Black History Month.

We’re working with the Brighton & Hove Black History Project to celebrate the legacies of people of colour throughout history in our city. 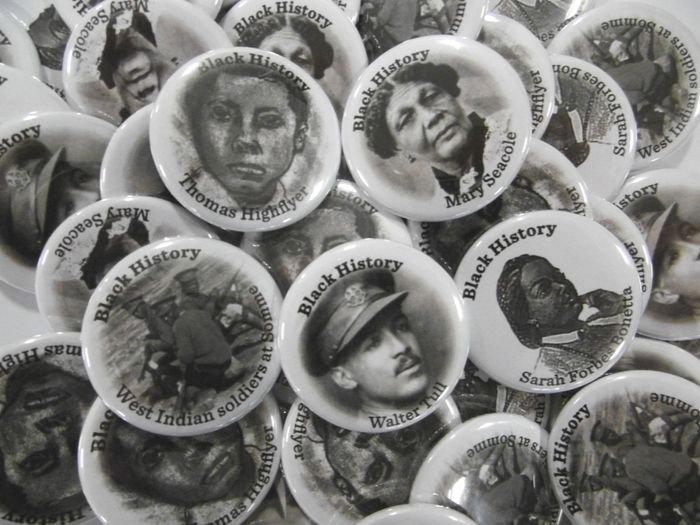 Where to get your badges...

The badges are available in Jubilee Library, alongside an exhibition, and can also be picked up from:

A gravestone in Woodvale Cemetery marks the last resting place of a young African boy who died in Brighton in 1870. The boy known as Thomas Highflyer is believed to have been around 12 years old when he died.

Rescued by the British Navy from a slave dhow in 1866, the young boy was renamed ‘Thomas Highflyer’ after the ship that rescued him.

Following his rescue, Thomas remained at sea for around two years in which time he learned English and became a highly skilled valet.

After his time at sea, Thomas was brought to England and was cared for by the Thompson family in Brighton’s Kemptown. Thomas attended St Mark’s School where it is understood he was warmly welcomed and highly regarded by his schoolmates. Unfortunately, Thomas died of illness in 1870.

The wedding of Sarah Forbes Bonetta to Captain James Davies St Nicholas Church in August 1862 may have been particularly remarkable. The bride was by birth an African princess of the Yoruba people and her groom was a very wealthy businessman also of Yoruba origin.

At around five years old, Omoba Aina, was captured and enslaved during a period of inter-tribal warfare. She was later rescued by a British Navy Captain, Frederick Forbes, and renamed Sarah Forbes Bonetta after the captain and his ship, the HMS Bonetta. In 1850, Sarah met Queen Victoria who was said to be captivated by her intelligence and personality. Queen Victoria had Sarah educated and cared for as a goddaughter.

Sarah lived in the Montpelier area after the wedding before the couple moved back to Nigeria where they raised three children. Sarah is believed to have maintained a close relationship with the Queen. Sarah died from tuberculosis in 1880.

Mary Seacole was famed for taking care of wounded soldiers during the Crimean War and can be proudly counted among Brighton & Hove’s many notable visitors!

Born in Kingston, Jamaica in 1805, Mary was the daughter of a Scottish Officer in the British Army and a free Jamaican woman. Mary learnt herbal and traditional remedies from her mother and a great knowledge of tropical diseases. She acquired further knowledge about medical practice from her acquaintance with military hospitals and became a very skilled practitioner, combining traditional remedies with contemporary medical practices.

She travelled to England in the early 1850s and was turned down from joining the ranks of the nurses being sent to the Crimea due to her lack of formal qualifications and underlying racial prejudice. Mary persevered and secured private funding to set up her ‘British Hotel’ for the treatment and convalescence of wounded officers. In later life she recounted her experiences in an autobiography, believed to be one of the first written by a mixed-race woman.

Walter Tull was born in Folkestone in 1888, the son of a Barbadian father and an English mother, and was moved to a London orphanage following the death of his mother. A skilful football player, he signed professionally for Tottenham Hotspur and on a tour became the first black player to play in South America. Walter was often subjected to racial abuse from opposing fans. It is believed that a contemporary article, in the ‘Football Star’ newspaper from October 1909, was the first to tackle the problem of racist abuse in football.

Following the outbreak of the First World War, he enlisted for active service in the British Army. He fought in the Battle of the Somme in 1916 and was later a Second Lieutenant. He was recognised for his determination and bravery, including a commendation for leading a night time raid across a fast-flowing river and bringing back all his men unharmed.

It is believed Walter was the first British born black officer to command white troops in battle. He was recommended for a Military Cross and awarded the British War and Victory Medal. Walter Tull was killed in action in March 1918 while leading an attack on a German trench.

Volunteers from British colonies in the West Indies formed the British Army unit known as the British West Indies Regiment. It is believed that 15,600 men served in the regiment, which had battalions deployed in Egypt, Palestine, France and Flanders.

The first men in the regiment assembled in Seaford in Sussex in 1915 to begin training. Unfortunately, the new arrivals had to suffer poor accommodation, inadequate clothing and a lack of equipment. The change of climate also took its toll, with many coming down with pneumonia and an epidemic of mumps.

Despite the initial setbacks, men from the regiment went on to serve with great distinction. General Allenby reported the gallantry of the men while under fire and that their efforts greatly contributed to operational success.

After the war, men of the regiment continued to face hardship and difficulties. They found themselves being used for manual labour such as loading ships and building and cleaning latrines for their white comrades. They also discovered they were being paid less than the white soldiers.

The resentment grew and eventually led to them refusing to work, which prompted some brutal reprisals. Many were tried for mutiny and received sentences between three to five years. The regiment was disbanded and many of the men spread around other regiments. Upon demobilisation, around 4,000 men were relocated to Cuba due to the fear of them stirring unrest if they returned to their native colonies.

We have a wide ranging series of events to celebrate Black History Month this October, from recognising the legacies of people of colour in our city to celebrating the Windrush Generation.