The Brighton & Hove Lesbian, Gay, Bi-Sexual, Transgender, Queer/Questioning Pride celebrates 50 years of community activism, demonstrations and a recognition that the first Pride was a riot!

50 years since the Stonewall riots

2019 marks 50 years since the Stonewall riots that took place, marking half a century of activism and achievements in the fight for equality and inclusion for LGBTQ+ people.

Brighton & Hove Pride is widely recognised as one of the largest and most popular in the country. As usual our council’s LGBTQ+ Workers Forum are organising their walking entry in the Pride Community Parade, joining groups from across the city on the march from Hove Lawns to Preston Park.

The struggle for equality continues

Cllr Amanda Grimshaw, lead for equalities, said: “Relentless action and many brave individuals have forced the pace of change internationally, here in the UK, and more locally in our city - defying the entrenched positions of state and society to make things better.

“The struggle for equality continues and every achievement is hard won. Change has been achieved through communities recognising we have more in common than divides us.”

We will be one of the first councils to display the new inclusive Pride flag, designed to recognise that the modern LGBTQ+ movement began through the support of and leadership of Black Trans Women, including Marsha P Johnson. It will be carried by the LGBTQ+ Workers Forum in the Community Parade.

The flag design reflects the appalling fact that Trans, Black and Ethnic Minority LGBTQ+ people experience higher rates of murder, other types of transphobia, homophobia and racism. The colourful design symbolises how everyone has many parts to their identity and that we should all work towards a world without prejudice and discrimination. 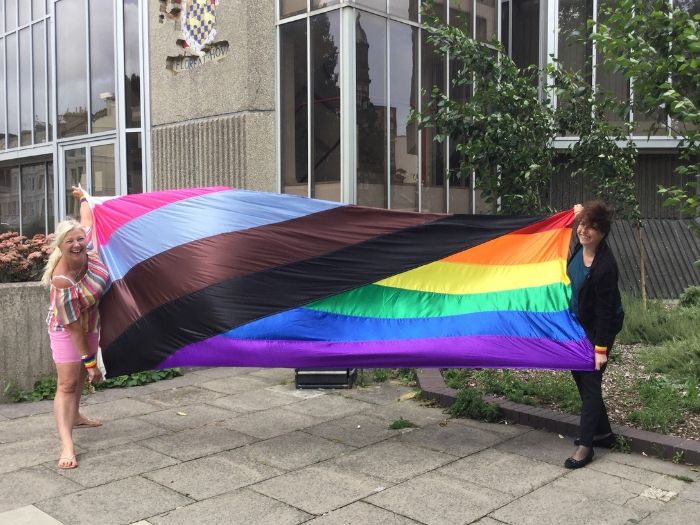 In this city, LGBTQ+ and allies stand together #WeStandTogether #BrightonPride2019

Learn more about Pride in our city

First aid, medical help and support is available in the city before, during and after Pride weekend. Many services also have extended opening hours.
Image

Pride in our city!

This year’s Brighton & Hove Pride celebration is taking place in just over a week from now. Find out more about this annual event in our city which is the UK’s biggest Pride festival.
Image