Find out where you can enjoy the freedom to roam in and around the city. 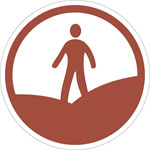 Brighton & Hove is surrounded by many areas of Open Access land available to enjoy on foot. Much of this land is crossed by rights of way and other paths.

Combined, the areas total 650 hectares (1600 acres) managed for local wildlife and people.  Open Access allows people to roam anywhere across the land, except where there are farmed crops. Please observe signs and follow the Countryside Code.

For practical reasons some areas of access land in East Sussex can only be reached via Brighton & Hove.

Another large area of Open Access land has been created by the council on the South Downs, north of Patcham. Check out the draft map of open access land (PDF 3MB)

The area is 282 hectares (670 acres), roughly ten times the size of Brighton’s Preston Park. It adjoins existing Open Access land the council created in and around Stanmer Park in 2006. In addition, Eight kilometres (five miles) of new footpaths and bridleways have been created, through rolling grassland. The ability to roam off paths means walkers on the Sussex Border Path can divert onto a route which keeps them further away from the busy A23.

The landscape includes the Chattri monument to Indian soldiers who died in the Royal Pavilion hospital from First World War injuries.

Other features are ancient burial mounds on top of Tegdown Hill – evidence of long use of the landscape by humans. The names Tegdown Hill and Ewe Bottom echo its history of sheep farming - tegs being young sheep. Also clearly visible are lynchets - terraces formed by ploughing dating back many centuries.

Works have involved installing a large number of gates and cutting a new path up a steep bank at Braypool.

There are large areas of open access land at: