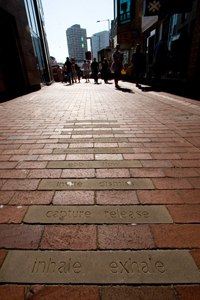 In October 2007 Brighton & Hove Children's Festival in conjunction with The South, a literary organisation, offered children aged 5-11 in the city the chance to have their stories and poems turned into a permanent story trail in Air Street. The idea behind the project was to promote writing and literacy skills to primary school children and also to encourage children to engage with the city's public spaces. The story trail opened as part of the Brighton & Hove Children's Festival in April 2008. 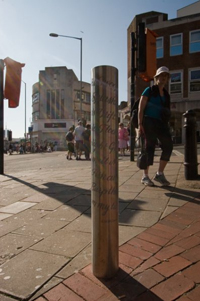 Children were invited to write a story or poem on the theme of 'air'. The five winning poems have been incorporated into Air Street using the existing street furniture; a painted bollard at one end, a stainless steel bollard at the other, a brass plaque set into the ground, engraved paving stones and a cast iron man-hole cover. 10 runners-up also had their work temporarily installed around the clocktower. The installation is subtle and could go unnoticed which makes finding it an exciting discovery.

Local company, Standard 8 designed and made the installations. They design and produce 3D installations and exhibitions focusing on creating new and eye catching work that gives across a message. For more information on their other works go to www.standard8.com.

A set of illustrated postcards containing the poems were commissioned and are available on request from arts@brighton-hove.gov.uk.