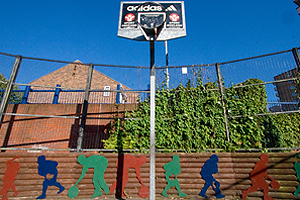 In 2008, Phoenix Rise Estate celebrated its 10th anniversary. To mark this event money was raised to repair the phoenix mosaic at the front of the Community Centre and provide a programme of art activities aimed at involving everyone on the estate. Artist Stig Evans organised 10 workshops that would enable people of all ages to participate. The resulting work included an animation and a series of permanent artworks situated around the grounds of the estate, these include: a golden phoenix wall sculpture, a mythical animal mosaic, mythical animal shaped railing and roof sculptures and a basketball player sculptural installation.

A workshop specifically aimed at teenagers and young people included a photography session where their brief was to take photos of each other playing basketball. They then used the images to make a stop frame animation. For the audio, they recorded the bounce of a basketball in order to make a beat and then edited the film using the beat as the soundtrack. The silhouettes from the original photos of the basketball players in action were then made into coloured steel sculptures and are positioned in various playing poses around the basketball court. 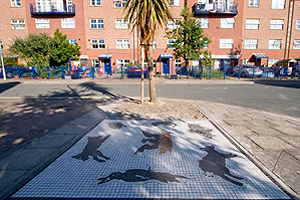 The central pattern of the original mosaic is a phoenix and this was taken as the inspiration for both the golden phoenix wall sculpture and the other mythical animal works. A 'pet's day' encouraged families to bring their pets to have their portrait taken by a photographer. The residents then divided the images of the pets in two, matching different halves of the animals together to create their own mythical creatures. These mythical animals were recreated in a new outdoors mosaic and in the steel railing and roof sculptures that chase each other around the estate.

See the next artwork: Write Around Air Street