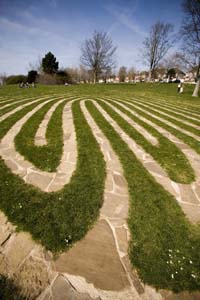 'Fingermaze' is a huge print in the landscape of Hove Park. The maze is based on a giant's fingerprint with a maze pattern inserted at the centre. 'Fingermaze' was designed by Chris Drury, a land artist based in the South East whose work explores art and nature. He explains "What I was trying to do was to make a very simple but mysterious image within the grass that would draw you into it, and in doing so, you would be walking the rhythms that are within our bodies".

In 2004, Drury was commissioned to 'draw' a temporary maze into the grass at Stanmer Park Brighton. Later in 2006, when Brighton & Hove Arts Commission launched their Urban Cultural programme, he was invited to consider a more permanent work that focused on our relationship with our environment.

'Fingermaze' is made with York flagstone and lime mortar. Lime mortar was chosen because its production uses less energy and leaves less of a carbon footprint than when using cement. The piece is extremely popular and has been absorbed into the life of the park. It has weathered over time, blurring into the landscape like an actual fingerprint. For more information on works by Drury go to www.chrisdrury.co.uk.

An education resource pack was commissioned as part of this project. The resource takes the 'Fingermaze' as a starting point and looks at environmental art, its origins and recent developments. To obtain a resource pack, e-mail: arts@brighton-hove.gov.uk

See the next artwork: Homeostasis