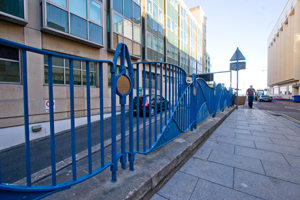 The Black Lion Street Railings consist of a set of blue steel bars that follow a repeated wave pattern with a swirl design and a black 3D lion shape on the end. There are brass plates at each join that are engraved with short poems about the sea. The black lion head and the poems were designed and written by children from Middle Street Primary School. The railings were then made by artist blacksmith Ricky Delaney, who produces traditional and modern ironwork with a focus on original design at his workshop near Stanmer Park. For more information on Delaney's work go to www.stanmerparkforge.co.uk.

See the next artwork: Patching Lodge-Gates and Railings