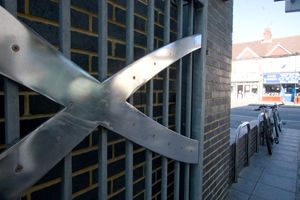 In 2006, Ben Prothero won the commission to make the railings for the new Aldi store in Portslade. The sculptural design reflects the sea and the neighbouring Portslade railway station. The railings consist of hand worked vertical steel poles which are the background for flowing waves of laser cut electro-polished stainless steel. The galvanised dark grey of the railings contrasts with the high polish of the wave formation, which flows across the 17 metres of railings and gates. The installation was completed just after the store opened in February 2008. Ben Prothero is an Artists Blacksmith and a member of the Royal British Society of Sculptors.

See the next artwork: Avalon Gate