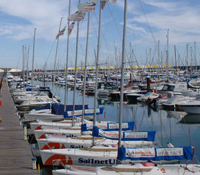 Brighton Marina is situated at the base of the cliffs to the east of Brighton & Hove city centre. It was created in the 1970’s and now functions as an independent component of the urban area. The Marina contains a mix of housing, shopping, commercial, leisure and recreational buildings, together with yacht moorings and a working harbour.

The Brighton & Hove Local Plan contains planning policies against which all planning applications in the city, including the Marina, are judged. It was adopted on 21July 2005.

There are two important reference points for the Marina:

The approved Planning Advice Note (PAN 04) Brighton Marina Masterplan is intended to act as a supplement to SPGBH 20. This masterplan deals with a much wider area than SPGBH20, including the whole of the marina, the Black Rock Site and Kemp Town Gasworks (TRANSCO) site. In the longer term it is anticipated that the PAN will form the basis of Supplementary Planning Document (SPD) to be developed in a forthcoming phase of the Local Development Scheme programme, which forms part of the Local Development Framework.

There is now a draft Issues and Options [297kb] paper that has been produced as part of developing the Brighton Marina Master Plan SPD.


Recent applications for major development at the Marina

To view the applications type the planning application number into the Planning Register.