A wide number of projects are in progress in the London Road area that will collectively play a major role in regenerating this high street on the north eastern edge of the city centre. 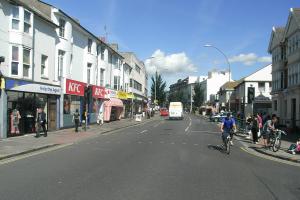 In recent years London Road has become the focus of a number of strategies and projects - as well as organised groups - all aimed at improving its environment and turning around its economic fortunes.

These various efforts and initiatives are summarised below, along with links to further information. You can also see the geographical areas covered in the locality on the London Road Projects Map.

The tide is now turning, with a growing number of new shops, food and drink outlets and other enterprises opening in the area, some major developments underway or in the pipeline and very few vacant properties now evident. The future of London Road is looking increasingly bright. Why not visit the area and see for yourself? 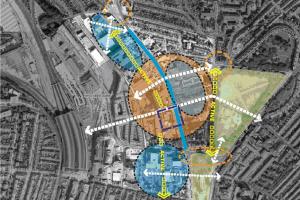 The London Road masterplan sets out a range of planning-related objectives and guidance to secure positive and long lasting improvements in the area. The vision is to make London Road attractive for business investment and a popular destination for customers to spend their time and money.

These objectives will be assisted through investing in environmental and public realm improvements - new public spaces for informal recreation and new high quality developments.

Projects in the London Road area

The redevelopment of the Open Market site involves the replacement of the former market with a new covered market, workshops and housing. This is a key strategic project aimed at improving the economic performance of London Road and attracting more customers to the area.

The restoration and improvement of this historic park, just to the east of London Road, was completed during 2013. The Level provides an attractive and popular open space, not just for people in the London Road area but for everyone in the city and its many visitors.

The Lively Cities project aims to provide a pedestrian-friendly 'oasis' on the edge of London Road. Following a successful pilot in 2012 we're now making permanent improvements to this area.

The council has allocated an indicative sum of £600,000 from the Local Transport Plan for public realm improvements in London Road. In order to make best use of what is a relatively limited budget (for such a large area), investment needs to be carefully prioritised.

A concept plan will be developed for the wider London Road area. Individual components of the plan will be costed. The design team will then work with the local community to identify where initial funding can be focussed most effectively.

This important mixed use development to the north east of Brighton Station is currently under construction and will complete the pedestrian route that will link the rear entrance to the station with London Road, the Level and beyond.

The development will also provide new housing, a pedestrian plaza, shops and (eventually) a new hotel and office block.

Planning permission was granted in December 2013 for the redevelopment of the City College buildings on Pelham Street, just to the west of London Road.

Brighton & Hove City Council and Wired Sussex are partners on the INTERREG ReCreate project to support the arts and creative industries, with £650,000 coming to Brighton & Hove.

The project includes the transformation of a long empty empty space in New England House into the 'Fusebox', a creative innovation hub whose aim is to encourage the testing and development of new business ideas between art and creative industry entrepreneurs.

Valley Gardens is the name given to the series of green spaces running from The Level down to the Old Steine and the seafront. We're developing plans to improve travel using this corridor to the city centre and the quality of the public spaces for the benefit of all.

Other initiatives in London Road

The London Road Local Action Team (LAT) provides a forum for local businesses, residents and local organisations to discuss local issues and work together on projects that will help to improve the area.

The LAT has been particularly engaged with planners and developers, hosting presentations at its regular meetings on a number of significant local developments. It is also involved with community safety issues, with much consideration currently focussed on problems around substance misuse, street community issues and squatting.

In summer 2012 the council led the Brighton – London Road Town Team's Portas Pilot. We were one of 27 areas to succeed in being granted Portas Pilot status by the Department for Communities and Local Government.

We received £83,485 to deliver projects to rejuvenate the London Road retail area. These include the creative and enterprising use of empty premises, business skills training, arts and cultural events and crime reduction initiatives. We also secured £10,000 in Arts Council funding to support the project.

The London Road scheme commenced in July 2013 when a Town Team Coordinator was appointed to oversee the successful delivery of the various projects, liaise with the London Road business community and to market the various initiatives in the area.