The Shelter Hall redevelopment will be completed later this year. The two new business premises are now available to let with commercial property agents Savills.

Find out more about letting Shelter Hall and the Rotunda 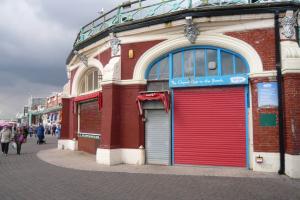 Work to reconstruct the former West street Shelter hall started in October 2015. To do the work on the Shelter Hall we have to reduce the size of the seafront road for two and a half years.

The essential work will save the seafront road, the A259, from collapse and secure it for the future.

Rebuilding will double the commercial space of the building, earning revenue for the council which could contribute to future upkeep of the seafront.  The junction above the Shelter Hall, where West Street meets the A259 seafront road, will also be remodelled to improve safety and the environment.

The listed wooden kiosk which was on the upper prom has been rebuilt and installed on the seafront near East Street.

The work to rebuild the city’s seafront at West street was kickstarted by a £9 million investment award from the Department for Transport’s Highways Maintenance Challenge Fund. The total cost is likely to be at least £19m, funded from government grants, borrowing and council money.

Essential work has been carried out under the structure to strengthen the seafront road and Kings Road arches and secure them for the future. More than 100 huge concrete piles were sunk into Brighton beach to prepare the ground for the new building.

The main Shelter Hall is two storeys high and includes a partial mezzanine floor, a rotunda on the upper prom and a roof terrace.  To complement and protect it we’ve built a new sea wall put in new lighting.

In April we began inviting expressions of interest from businesses wanting to rent space in Shelter Hall.

A protective scaffold has been erected around the structure to protect it from the weather while the external fittings are put in place.

Over the summer and autumn our contractors are installing windows and doors, working to complete the roof and fitting out the inside of the building.

Watch our videos for updates about the work taking place to rebuild the Shelter Hall. 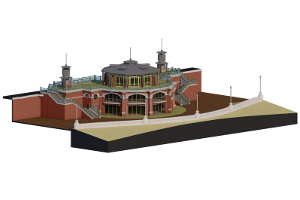 The main building will be two storeys high and include a partial mezzanine floor. The new building has permission for restaurant use and a shop.

A new rotunda, on the upper prom, will provide a café / restaurant space of around 100 square metres - equivalent to 10 metres by 10 metres square.

Commercial space inside the new buildings will more than double to 1,530 square metres, roughly 40 metres by 40 metres square.

The wooden kiosk, dating from the 1880s, which was above the Shelter Hall has been restored and rebuilt on the upper prom 200 metres to the east. It houses a cafe. Planning permission for the move was granted in December 2016. Get the planning application details.

The scheme is part of the first phase of the council's investment programme for the seafront infrastructure which is in urgent need of restoration and regeneration. This aims to make it fit for the 21st Century and benefit generations to come.

The derelict Shelter Hall (150-154 Kings Road Arches) was built in the 1880s as part of the historic Kings Road Arches and supports the upper promenade at the junction of the A259 and West Street.

In 2013 a gym occupying the Shelter Hall was moved out after the building was found to have serious structural weaknesses. Safety improvements were made to prevent the structure from collapse, and to protect pedestrians and cyclists above.