Advice for moped or motorcycle drivers who are travelling in the city.

Use of Lewes Road bus lanes by motorcycles

In May 2017, an 18-month Experimental Traffic Regulation Order (ETRO) began. The ETRO allowed Solo Powered Two Wheelers including Mopeds and Scooters to use the bus lanes on the Lewes Road between the Vogue Gyratory and the City Boundary at Falmer.

On the 9 October 2018, a report that recommended the ETRO be made permanent was taken to the Environment, Transport and Sustainability committee. The report concluded: The data gathered shows that the introduction of the trial has not had a significant negative effect on general traffic, speeds or collisions and therefore it is recommended that the Experimental Traffic Regulation Order should be made permanent.

The Environment, Sustainability and Transport Committee approved the recommendations on the 10 October 2018.

The ETRO remained in effect for the full 18-month period and on 6 November 2018 a permanent Traffic Regulation Order came into effect allowing Solo Powered Two Wheelers including Mopeds and Scooters to utilise the bus lanes on the Lewes Road between the Vogue Gyratory and the City Boundary at Falmer.

Other bus lanes open to motorcyclists are two sections of bus lane on the A23 and A259 on a permanent basis. These are between Carden Avenue and Preston Drove on the A23 and from Telscombe Cliffs Way to the Ovingdean Roundabout on the A259. Tricycles and Motorbikes with side cars are not permitted.

Bus lanes not open to motorcycles 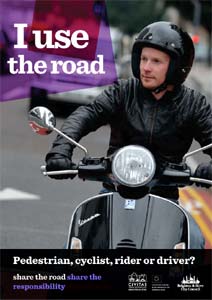 Moped and motorbike riders are one of the road user groups at highest risk on the roads of Sussex. Part of the reason is due to the difficulty of being seen by other road users and not being able to judge the biker’s speed easily.

Wearing the right gear is essential, this includes protective:

Coming off at just 20mph and hitting the road surface unprotected can do some serious damage. Recent research backs up common sense - wearing boots means you are over 50% less likely to have foot/ankle injuries if you come off compared to shoes/trainers.

Being visible in both what you wear and how you position yourself on the road will also let people see you. For more information go to the DirectGov riding motorcycles and mopeds page, or take a look at the share the road campaign and SSRP - safer for motorcyclists.

A variety of organisations with local groups offer advanced training, these include:

The Enhanced Rider Scheme also offers advanced training to those who have passed their test.

ICE sticker - In Case of Emergency

The South East Coast Ambulance Service Trust launched a new potentially life-saving scheme for motorcyclists called the ICE sticker. It will hold vital information about the rider to help ambulance staff treat riders involved in serious road traffic collisions. Should you be thrown off your bike and left unconscious or unable to communicate, the sticker can be scanned and inform emergency services of who you are and key medical plus contact information.

The ICE sticker from CERQL is currently sponsored in Sussex by the Sussex Safer Roads Partnership. It enables you to upload onto a website a photo of you, medical and contact details which can be accessed on site via a QR code sticker on your helmet via a smartphone. If you have difficulty getting either of these products then you can contact transport.projects@brighton-hove.gov.uk.  They are usually available at events where the Partnership attend.

There are many similar robust commercial products that identify you and any medical conditions, which are worth carrying, just in case.