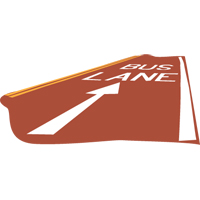 Each year around 45 million trips are taken by people travelling around the city on buses. Bus services are a fundamental part of the city's transport system and we need to ensure that bus lanes and corridors are free from unauthorised vehicles so that buses can provide a reliable, efficient and attractive service to the city's residents and visitors.

Bus lanes are lanes designated for buses and taxis which run alongside general traffic lanes. Most bus lanes are also open to cyclists (although there are some exceptions on short sections) Two sections of bus lane are permanently open to motorcyclists and a third section is open on a trial basis from 6 May 2017 (see below – ‘Who can use the bus lanes?’).

Bus corridors are roads which are for buses, taxis and cyclist only. These are monitored every day. We can issue a Bus Lane Penalty Charge Notice and the police are able to issue penalties on the spot.

How do I know when the bus lane or corridor starts?

When you approach a bus lane or corridor you will see signposts and markings on the road.

It is your responsibility as a motorist to ensure that you have checked the signage and taken the appropriate action to avoid entering restricted areas.

All areas of the city are accessible without entering the bus lanes.

There are a number of alternative although less direct routes across the city that avoid the bus lanes and you must use these unless in an emergency or you have an exemption.

Here are some details about alternative routes.

Is there a map?

The bus corridor map (PDF 768kb) shows which areas of the city centre are restricted to buses, cycles and taxis.

Restrictions are clearly marked at the entrance of the bus corridors which are in operation 24 hours a day, seven days a week unless indicated. If you enter the bus corridor during these times, you may be issued with a Penalty Charge Notice.

Who can use the bus corridors and lanes?

Buses, taxis and cycles can use the bus corridors in the city.

This scheme was introduced in 2003 to improve the traffic management in the city giving priority to buses, taxis and cycles. Blue Badge holders are not permitted to use the bus corridors, motorcycles can only use the two routes described below.

Bus lanes are open to buses and taxis. Cyclists can also use most of the bus lanes.  Some central city bus lanes and corridors do not permit cycling but you will be able to use the road or off road cycle routes at these points. Look for the signs at the entrance to the bus lane.

The trials for motorcycles in bus lanes on the  A259 between Telscombe Cliffs way and Ovingdean Roundabout and the A23 between Carden Ave and Preston Drove are now complete and both lanes are open to motorcycles on an ongoing basis. A trial on the A270 Lewes Road from the Vogue Gyratory to Stony Mere Way begins on 6 May 2017 for an 18 month trial period.

For more information on the trial see https://www.brighton-hove.gov.uk/content/parking-and-travel/travel-transport-and-road-safety/road-safety-moped-and-motorcycle-riders

To comment on the Temporary traffic regulation order (during the first six months of the trial only) go to http://www.brighton-hove.gov.uk/content/parking-and-travel/parking/traffic-regulation-order-tro-proposals

Are there any other bus lanes in Brighton & Hove?

There are other bus lanes in Brighton & Hove for example on London Road and the A259. These will be clear to see as they have signs and road markings to let you know where they start and end.

The police enforce these bus lanes and may issue a Fixed Penalty Notice.

I have received a Penalty Charge Notice when using a bus lane what can I do?

You should decide whether to:

You can view any photographs taken by the Civil Enforcement Office or CCTV prior to deciding whether you want to pay or challenge the Penalty Charge Notice. Photographs can be viewed 24 hours after the ticket has been issued.