Information about Tree Preservation Orders, report a problem tree and how to donate a tree. 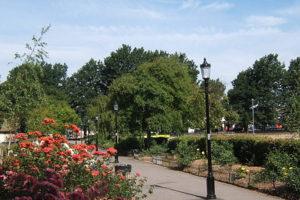 About the Arboricultural Service

The Arboricultural Service consists of specialised officers known as Arboriculturists. They are responsible for the management of thousands of trees in our parks and open spaces.

There are over 12,000 street trees across the city and they assist with the management of over 500 hectares of woodland in and around Brighton & Hove.

You can find out:

If your question isn't answered on our web pages, or you have an emergency involving a tree please send an email to arboriculture@brighton-hove.gov.uk or phone 01273 29 29 29.

Council tree experts became aware of a concentration of affected elms in the Westbourne Street area of Hove in August 2015.

After an extensive search of the area, they identified the source as a pile of logs on private land that had become a breeding ground for the elm beetles.

Unfortunately 14 trees have had to be destroyed. Our tree experts are dealing with this outbreak as a matter of urgency.

Brighton & Hove is host to the National Elm Collection, partly because of its excellent track record in elm preservation.

Whenever residents have work carried out on elm trees, it is vital that the material is deposed of correctly by competent tree surgeons or gardeners. Also, when purchasing fire wood you should always check with the supplier that it contains no elm wood.

For more help about Elm trees or identifying suspect logs, please send an email to arboriculture@brighton-hove.gov.uk or phone 01273 29 29 29.

About storm damage and tree pruning

The stormy weather over the last few years led to us prioritising hazardous trees and other issues. Unfortunately, this has had a knock-on effect of reducing the number of street trees pruned, and delayed pre-scheduled and proactive work by about a year.

Brighton & Hove has an estimated collection of some 12,000 street trees which receive health and safety inspections every three to four years. We checks for Elm disease and dead trees annually and act quickly to help prevent Elm beetle infestations and infections.

Highway trees are subject to statutory work which requires the removal of obstructions such as the clearance of basal growths and low branches to allow for the free passage of pedestrians and vehicles.

What Ash Dieback is and how to spot it

Ash Dieback is a fungal disease (Chalara fraxinea) that affects Ash trees. The symptoms are early leaf loss and crown dieback which can lead to the death of the tree.

Common Ash is the third most prevalent woodland species in the United Kingdom. They are present in high numbers throughout the city’s 504 hectares of woodlands.

There are few highway Ash trees, some exist in parks and open spaces and, where prominent, their loss would create a significant impact upon the local visual amenity of the area.

The symptoms first become visible during early June when the leaves are first emerging. These show themselves as wilting and dark discoloration on the leaves with elongated lesions developing on the smaller branches. Eventually the whole crown will become infected with a characteristic ‘crown die-back’ developing over the next few years.

We are aware of the disease and, where detected, we report it to the Forestry Commission. Because of the inevitable spread of the disease and nature of spore dispersal throughout the southern regions, measures to curb its spread cannot realistically be achieved.

The stance the council takes to control Elm disease by sanitation felling is not appropriate. We will only act to reduce the risk of falling parts to cause injury or damage to persons and property where Ash trees become a danger. Where appropriate, we will replace purposely planted trees with others that are resistant or of a different species.

The disease spreads via spores caught in the wind from tiny mushrooms born from the main leaf stalk and has the ability to spread within a ten mile radius within one year. Over longer distances the risk of disease spread is most likely to be through the movement of diseased ash plants and foliage.

Movement of logs or unsawn wood from infected trees is currently considered to be a low risk of disease spread. Thorough composting, burying or burning infected parts of Ash are considered appropriate methods to destroy infected material and may slow the progression of disease.

Further information on the disease is available from the Forestry Commission website.

There are common Ash trees found to be resistant within disease infected areas. The Forestry Commission and other interested parties intend to identify and propagate from these as part of a natural succession towards repopulating the Ash back into areas which have been decimated.