Information on what dew ponds are and where you can find them in and around the city. 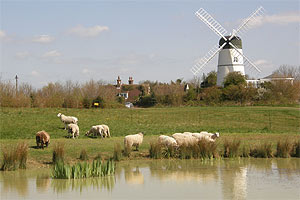 Please note that periods of low rainfall and droughts can result in low water levels in many ponds. This is a regular and naturally occurring event which actually benefits some of our specialist pond wildlife. Filling ponds with mains chlorinated drinking water is both wasteful and detrimental to our native pond wildlife. Please do not attempt to rescue pond wildlife - even ponds which look dry can mask deep mud underneath which could be dangerous.

There are many dew ponds in and around Brighton & Hove. A dew pond will attract migrating birds, waterfowl, thirsty mammals, and breeding frogs, toads, newts and dragonflies in the spring. It also provides a low cost water supply for livestock.

However people allowing dogs to play in the water, particularly in spring, disturbs the water and disrupts the delicate balance required for wildlife to thrive and breed, sometimes resulting in a sterile and muddy eyesore of little or no wildlife interest.

Similarly fish which are sometimes released into dew ponds can quickly multiply and disturb the balance to the detriment of the health of the pond and the native wildlife such as frogs and newts.

What are dew ponds?

In the past, just as now, farmers had to make sure their animals had enough to drink. In many areas cows and sheep could drink from streams and rivers. In dry areas, however, farmers had to provide ponds. Dew ponds are small, round ponds sited in hollows, made by digging a pit and lining it with clay.

They are found in a few dry, hilly places, like the South Downs, where there is no water running down the hillsides. This is because the rock underneath the surface, mostly chalk, is full of small openings and water simply drains away underground.

How were dew ponds made originally?

Most ponds have been made deliberately, by digging shallow pits. Dew ponds were lined with clay to stop the water from draining away. the clay was "puddled" (wetted and trampled) until it made a watertight seal. Other materials were mixed with the clay: a layer of lime underneath to discourage worms from puncturing it; straw mixed in to protect it from cracking in the sun; a layer of flints on top to prevent cow and horse hooves from piercing it.

Dew ponds have been built since medieval times and there were once hundreds of them around Brighton & Hove.

How are modern dew ponds made?

Modern dew ponds are dug out often on the site of old ones which have dried out or been filled in. Nowadays a plastic liner is sandwiched into the straw. This will hold the water in case the clay dries out and cracks in hot or dry weather (usually rainfall is much greater than evaporation so only happens in drought conditions).

Dew ponds will attract many types of wildlife. Amphibious reptiles such as Frogs, Toads and Newts lay their eggs in water even though the adults can live on land and in the winter frogs will hibernate in the mud at the bottom of the pond.

Dragonflies lay eggs which hatch into Dragonfly nymphs and live in the water until they reach the pupa stage. In the summer the adults hover and dart above the water, their brightly coloured wings catching the sunlight.

Reeds around the edge of the pond provide cover for waterfowl like Moorhens and Coots, Mallards and the Shy Brown Teal.

Dewponds in and around the city

Other ponds in the city