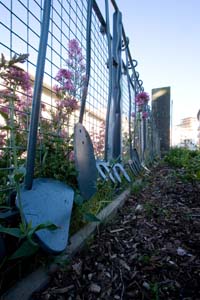 Adjacent to Brighton Station is one of the largest regeneration projects in the city, transforming the former railway goods yard into a mixed living and working area. An artists' team has been closely involved from the start of the project.  Lead artists Steve Geliot, Fiona Atkinson and Jon Mills have developed a strategy involving local school and community groups, and have each produced parts of the project.

The concrete landscape by Fiona Atkinson is broken up with art pieces that fit into the flow of its design. 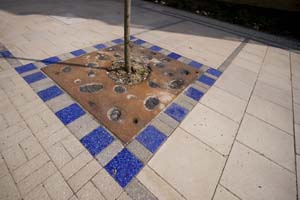 Steve Geliot and Juliette Pearce designed a series of ceramic plaques that decorate the side wall of Sainsbury's. Geliot also designed the cast iron tree grills that are surrounded by glass blocks by David Watson and a series of organic sculptures that are situated further up the site towards the station, on Greenway. 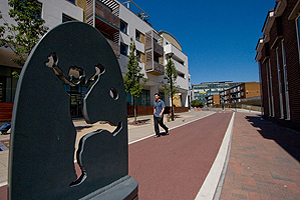 A number of works by Jon Mills can be seen across the site. Lining the green space on Greenway, are his garden tool sculptural railings. He also created a series of cut steel cartoon like images of running men that add to the road railing barriers. Based on the idea of a flick book these figures appear to run for a train as you drive past. Mills also worked with children at St. Bartholomew's Primary School to design a personalised gate feature that forms an arch as you enter the school. 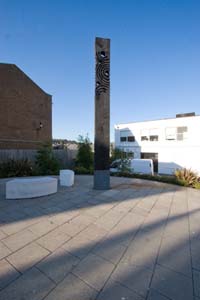 Walter Bailey's tall, carved oak sculpture is surrounded by and makes a sharp contrast to Rachel Reynolds compact white concrete seats. The seats with an organic, fossil like detail, line the footpaths across the site. All the public art pieces work together to add an interesting visual detail to the landscape and give a connection between the different elements of the development.

Several new commissions for the area are in the process of being put together, including Jon Mills' Ghost Train on Network Rail's bridge.