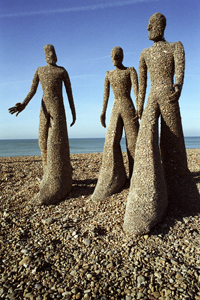 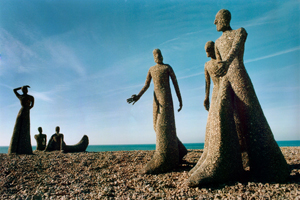 The project was funded by National Lottery Funds plus private donations and support in kind from a number of individuals and organisations.  Artists Liz Whitehead and Paul Harrington created 'Crowd' with technical support from Philip Morgan.  They welded steel frames inside each figure and modelled a mesh on the outside of the figure over each frame.  This took several weeks work spread over a number of months.  The figures were then installed on the beach on 7th April 1999, where they were filled with beach stones which took a team of 9 people the whole day to complete. 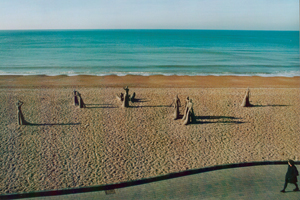 The work was interactive and accessible; visitors could become a part of the work- examining, touching and moving amongst the pebble people. As the day past, the shadows lengthened and the beach cleared, 'Crowd' became a collection of strange statues, a slice of the days' human activity frozen in a stony snapshot.

See the next artwork: In Our Hands