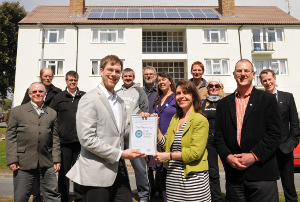 Brighton & Hove becomes the world’s first designated One Planet City this Thursday when the city’s Sustainability Action Plan officially receives independent accreditation from BioRegional for its plans to enable residents to live well within a fairer share of the earth’s resources. BioRegional is an award winning charity with an international reputation for developing sustainable solutions.

The action plan sets out how the city can meet all the international targets under BioRegional’s recognised ‘One Planet Living’ principles, identifying achievable goals for the city to meet a more sustainable target – using just one planet’s worth of resources rather than the current three and a half. BioRegional is working in partnership with One Planet communities across the world, as well as with businesses like B&Q and the Kingfisher Group.

BioRegional’s Chief Executive, Sue Riddlestone OBE, will meet members of the city’s Sustainability Partnership on the Bristol Estate where they will see  how the council is putting words into action with an insulation programme for council housing to cut energy costs and carbon emissions. Tenants are already feeling the benefit of warmer homes, and are beginning to see significant reductions in their heating bills. A number of tenants are providing ‘before and after’ fuel bills to the council to evidence the improvement that the cladding and insulation has made. The council plans to roll out these sustainable improvements to council housing blocks across the city.

Councillor Jason Kitcat, Leader of Brighton & Hove City Council said: "It's a huge achievement for Brighton & Hove to be accredited as the world's first One Planet City. If everyone on the planet used the same amount of resources as we do in Brighton & Hove, we’d need three and a half Earths to keep going. It’s just not sustainable for us or anyone else on the planet to go on at this rate. It’s a challenging time for the public sector, but we’re not going it alone. BioRegional and our partners in the city are working with us to shape a ‘One Planet City’. Together we can boost the local economy, become more resistant to price hikes in energy, fuel and food, and foster a more equal and healthy city.”

Sue Riddlestone, Chief Executive of BioRegional, said: “We are delighted that Brighton and Hove has committed to become the first One Planet City. We’ve been working in the city since 1999, the main project so far being the award winning ‘One Brighton’ Community in the New England Quarter. Brighton and Hove is a place where you can see the level of innovation and commitment to sustainability all around you, from the City council to the many thriving enterprises and community activists. This Action Plan is the next step on the way to a happy and prosperous future.”

Vic Borrill, Director Brighton & Hove Food Partnership agrees that  it is imperative for everyone to work together to achieve the One Planet Living Action Plan, she said, “It is fantastic to see the city making a commitment to reducing our ecological footprint.”

The Sustainability Action Plan is a practical three year plan that has been put together by the council, BioRegional, the city’s partnerships and other leading organisations in the city. It outlines both short term actions and longer term ambitions for the council and the city to improve local quality of life, reduce impacts on the environment, save money and make Brighton & Hove more resilient.