The tradition and history of the mayorality

The traditions of the mayoral robes and chain and historical mayor's of Brighton & Hove.

The Mayor of Brighton & Hove wears the chain over the mayoral robes at civic ceremonial functions. He or she is also usually accompanied by the macebearer who carries the mayoral mace.

For less formal occasions, only the chain or the badge will be worn.

The Mayor’s badge and chain 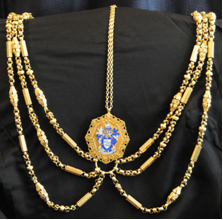 The mayoral chain can only be worn at mayoral engagements within the city boundaries. It must not be worn when entering a neighbouring authority unless permission granted by the mayor of that authority. Similarly mayors visiting Brighton & Hove will ask permission to wear their chains. On other occasions the badge of office will be worn.

The badge fixed to the mayoral chain was bought in 1997 when the unitary authority came into existence and it represents the Brighton & Hove crest.

Mayoral robes are only normally worn at civic ceremonial functions such as Annual Council and Remembrance Sunday Services when other members of the council are invited to attend, or on other occasions if the mayor thinks it appropriate.

The robe worn by the Mayor of Brighton & Hove was worn by former Mayors of Brighton. It was presented in 1855 by “some ladies of Brighton”. 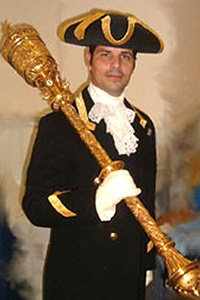 The mace is carried before the Mayor by the macebearer on ceremonial occasions and at meetings of the Full Council. It was originally a weapon of war.

The authority has two maces:

Although generally the Brighton mace is used, both maces are still in good condition and either can be used on formal ceremonial occasions.

The word 'mayor' originates from the French word 'maire' which means head of city or town government.  It was the Municipal Corporations Act of 1835 that confirmed the Mayor as the first citizen of the borough and the ceremonial head of the council, although the Mayor has few actual legal powers.

For a more information on past mayors of Brighton, Hove and Brighton & Hove, you can view the timeline of past Mayors.