As part of the conservation and required maintenance to the green wall, the council’s parks team is going to be carrying out trimming of the lower branches of the fig tree and tying it in to newly installed training wires. This is part of the agreed plan which will look after and maintain the plants on the wall going forward.

This work will support the tree and encourage it to grow up the retaining wall rather than out into the road.

Over the summer we have been watering the plants to encourage new growth and are meeting regularly with Brighton & Hove Building Green to agree a strategy for maintaining the wall. The plants will be monitored as part of the ongoing maintenance plan and any future works will be undertaken by the Parks team following agreement with Building Green.

From 13 September, a new Boardwalk is being installed as part of the Black Rock regeneration works.

From 20 September, Landbuild are continuing the vegetated shingle works.

Footpath diversion signage will be placed at each end of the diversion.

From 6 September Landbuild were back on site to work on the vegetated shingle. They are creating ‘wave formations’ to prepare the ground for new plants grown from cuttings at the Millennium Seed Bank. These will be delivered to the site from Wakehurst Place.

They will also start installing the Boardwalk which will run from the western end of Duke’s Mound beside the Volk’s Electric Railway Workshop along the eastern seafront to the Black Rock site.

Black Rock and the Sea Kale: Friends with Benefits

We are commissioning the first phase of a larger programme of public art installations for the site.

To make sure all artworks complement each other, we have developed a Black Rock Public Art Strategy which sets out a theme: Black Rock and the Sea Kale: Friends with Benefits, which all of the artists have to respond to as the starting point for their proposals.

The theme is based on some of the key aims of the project, such as the improvement of the environment and the relationship between people and local habitats.

Biodiversity improvements are important to the project as a whole. We identified these as a main priority when we did the community consultation for the project. They also follow the council’s pledge to be a carbon neutral city by 2030.

One of the art commissions is to create a series of three permanent marker sculptures.

These sculptures will sit on top of support masts at the end of the three sections of the new boardwalk which lead across the beach, from the shore towards the sea. They will be there to make the area look better. as well as acting as landmarks to help people find their way.

These sculptures will build on the key aims of improving the local environment and ecology.

Three successful artists will be awarded with a fee of £6,000 plus VAT. The contractor will meet the fabrication and installation costs

The Face of Black Rock

The other commission is for the Face of Black Rock: a design for the textured finish for a new wall that is proposed for the site.

Much of the Black Rock site is characterised by the existing retaining wall finishes. This new finish will provide a new texture, and create additional habitats for local plants and wildlife.

The successful artist will develop their detailed proposals for the concrete finish in collaboration with the project team, including the contractor, fabricator and project ecologist. The finish will follow the theme for the site.

We’ll provide 3 shortlisted artists with a small fee of £300 to outline their approach and present to the selection panel in early September. The panel will award the successful artist with a fee of £8,100 plus VAT. The contractor will meet the costs of fabrication and installation.

Our ecology team is giving detailed advice on the relocation, improvement and creation of the natural beach habitat and landscaping on Black Rock. The team acts as a collective ecological ‘clerk of works’ to supervise this work throughout the project and ensure high environmental standards are followed.

As part of the planning process, we produced several different plans with our ecology team and the County Ecologist, including:

Before introducing new plants, the team talk to the County Ecologist and the Millennium Seed Bank at Wakehurst Place to make sure the right plants are used for the wildlife areas at Black Rock.

The Millennium Seed Bank is growing more than 1,000 plants, including sea kale and yellow horned poppy. As part of this important collaboration with the Millennium Seed Bank, they are releasing seed from their collection specially for this project. All seed and plants are of locally native species collected in Sussex, which will encourage the re-emergence of local habitats. 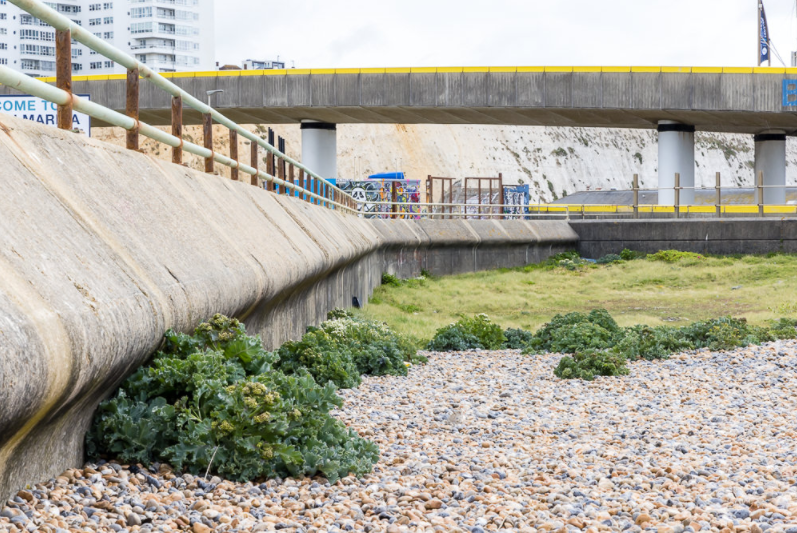 The boardwalk works started in September together with the shingle shaping works to the area of the beach opposite Duke’s Mound, making the area ready to receive the new planting plugs from Millennium Seed Bank. These have been propagated from sea kale harvested from the Local Wildlife Site earlier in the year. Planting will take place in October/November. The first phase works to the screen embankment area behind the Naturists’ Beach (known as a ‘bund’) is showing good signs of growth. The total area of vegetated shingle habitat across the beach will be 1.5 hectares, a 5.5-fold increase on the original Local Wildlife Site. The

vegetation will be protected by the boardwalk with a balustrade to allow it to establish over the 25 years required.

Phase 4a works to begin on 1 June

We are pleased to confirm that the next phase of work for the regeneration project is starting on 1 June. We will be to starting to relocate the vegetated shingle at the wildlife site. During working hours 2 of the 6 available crossing points over the Volks Railway will need to be closed. These will re-open when we complete the first phase in 3 weeks time. 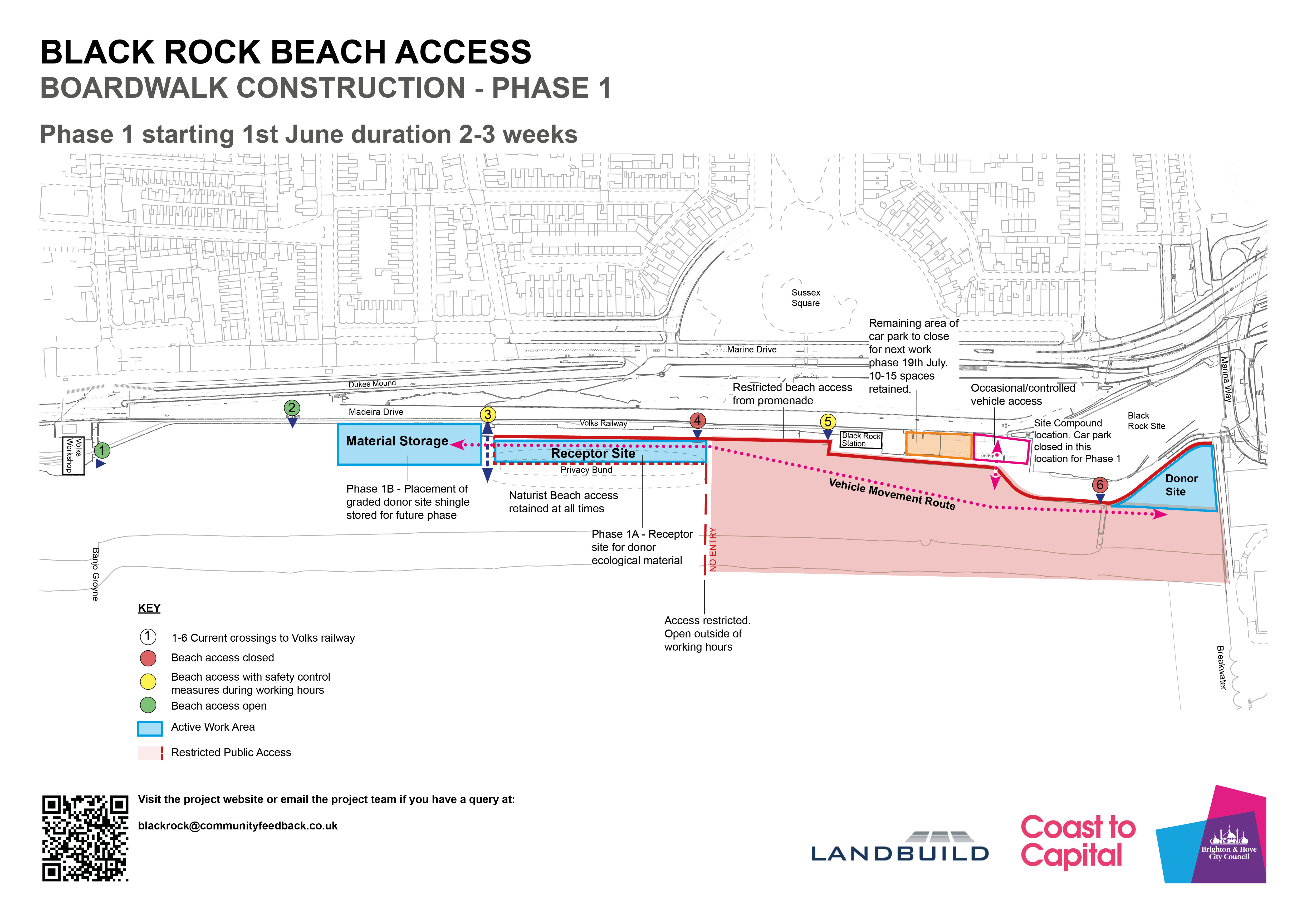 Map showing the access to Black Rock Beach during the construction of the boardwalk - phase 1.

The map shows a top-down view of Black rock seafront with the West of the beach to the left and the East to the right.

There are 6 crossings that allow pedestrians to cross the Volks Electric Railway line and access the beach. These are labelled 1 to 6 in ascending order from West to East. 1 and 2 are unobstructed as normal. 3 sits between areas used for stockpiles of graded shingle for use in a future phase of works on the left, and the receptor site for donor ecological material on the right.

This receptor site is directly North of the privacy embankment used to obscure views of the Naturist beach. There will be restricted public access from the Western edge of the naturist beach to the breakwater by the Marina. Access points 4 and 6 are at either side of the area just described. Access point 5 is immediately to the West of Black Rock Station. You will be able to access the beach here with safety control measures during working hours.

The car park immediately East of Black Rock station will be partially closed as described below. The Donor site for the Shingle used at the receptor site is at the North-Eastern edge of the beach before the Marina. There will be Vehicles driving between this donor site and the material storage site while the works carry on.

The whole of the Black Rock car park closed on 6 September to provide space for welfare and storage facilities for the project.

It will re-open in 12 months’ time and we will also resurface the car park and install new planting.

We have spoken with adjacent businesses about the car park closure to ensure people can still access their businesses. Throughout the staged approach to the closing of the car park, the five disabled parking bays will remain available for use.

Later this year we’ll be creating further extensive habitat to the east, opposite the Reading Room. This will follow the first two phases of works opposite Kemptown Slopes and Duke’s Mound, and once we have finished the new accessible boardwalk.

These areas will be treated differently, with existing beach profiles modified and selected areas receiving finer shingle to their top surfaces.

We will give them a variety of treatments ranging from allowing undisturbed natural growth, for the assessment of natural colonisation, to planting and largescale seeding from the Millennium Seed Bank.

We will protect this area by surrounding it with a protective 1.5 metre wooden upstand, to prevent people walking on the growing plants until they become established.